The Passengers on the Bus

This pic has nothing to do with the bus. It's a tunnel Cutter and friends made in the deep snow. I like it. 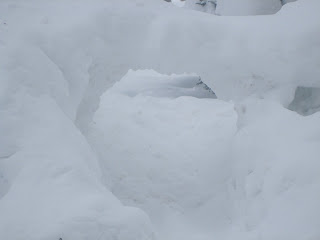 Last spring, after a time in which I felt a lot of anger and confusion surrounding my world, I began talking with a wonderful woman. She has gifted me with many useful navigational tools, and one of my favorites is the symbolic bus. Each of us has a bus. We are, each of us, the drivers of our own bus. We cannot control the speed of the bus and there are no brakes, but we can control the direction in which the bus moves. The challenge is in how we interact with the passengers on the bus. The passengers are many and varied and frequently quite loud. They are your high school English teacher telling you you can't write or your grandma saying you're ill-mannered. You can sit in the back with your passengers, arguing with them, trying to cajole them to understand your point of view, or you can admit that they're there, they're not getting off and you can still direct the bus down the path you want to take. When I find myself feeling frustrated or angry, it helps to ask who's driving the bus. Is it me, and do I want to head in the direction of the frustration or is it one of the passengers directing me that this is how it's done, the right way?

This week Sunday we celebrate Isaiah's birthday. It doesn't come into my mind to think, He would have been seven, he would have been doing such and such because he will never be seven and I would rather hold the joy of who he was than the sadness of who he might have been. So we will eat pizza with special sauce and share the light blue napkin he loved and celebrate his joy.

Driving to the aquatic center last night, Cutter asked if I could park close (the temperature was near 0). I said I would, except all the close spots were reserved for cars with handicap tags. As we pulled into the last spot in the row, Cutter said, "I wish Isaiah were still alive." I turned to look at him and asked what made him feel that way just now. He passionately said, "Because he was my brother and he was fun and I loved him.... and we could still park in handicap." And then he burst out laughing, me along with him. He said the first part was true, the second part just a joke. I could have listened to that societal passenger just then, told him that death wasn't funny. Instead, I celebrated that he did not find death a fully depressing subject, that he has integrated the sadness and the joy of life.

Wishing you joy and laughter in the dance, especially when the steps are most complicated.
Posted by Jen at 8:21 AM

thank you for your words, and for sharing your experiences with us.The bus analogy is a good one, but if i am the driver, am I allowed to kick some of the passengers off? I am guessing no. we remember and celebrate the love and the life with you. Isaiah is missed so very much. much love to you all. cole

I too think your analogy is a good one. Unless of course, I'm one of your loud passengers :)
thank you for allowing us to ride along with you and share the memory of Isaiah. love you.

just wanted to share my missing of isaiah as well. looking through my work emails for something today i happened upon some pics from thanksgiving over 5 years ago at you, joe, joey, and isaiah's condo in chi-town. so much has changed since that family get-together. the young ones have grown. both family's have moved 1 or two times. where 1 child is sadly missing another is present. neither physically perfect yet both perfect for all those whom knew and will know them and their stories. missing isaiah this week 7 years after his birth. :-(