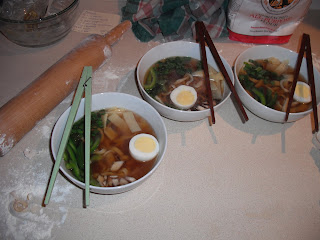 Our world has been very full the last four months and every time I consider writing, I become overwhelmed with the sheer amount of what I want to share. To avoid that altogether, I'm starting with just one day: yesterday.

Yesterday morning found Cutter a little groggy, as he said he'd stayed up until 2:00 a.m., finishing the first volume of Elfquest. He'd gone through the entire series over a year ago, but that was before he was reading, so he wanted to revisit the comic and his namesake, Cutter, to get a better understanding of the story.

We watched a Japanese/English sub-titled episode of Naruto Shippuden; it was Cutter's first experience with sub-titles and he found that the Japanese version uses different voice actors, so the characters felt unfamiliar and we decided to wait to watch the rest of the episodes in English. Because Naruto eats so much ramen, Cutter was sure that it must taste good, which led us to look up authentic ramen recipes.

While looking up ramen recipes, I came across a French-made cartoon maker, so Cutter spent a good amount of time making cartoons with captions and sending them to Joe at work. It was fun for me to use some of my French and we were able to translate the phrases into English.

After that, our first stop was the Halloween store, where Cutter found a costume, Shadow Ice Ninja, which he's pretty sure (and pretty excited that) he'll be able to wear two years in a row. From there, we went over to the home goods store, where we found chopsticks for our ramen as well as a Japanese knife so we could cut the ramen dough into noodles. Next stop, the bookstore for a book of pizza recipes. Cutter and I have been making homemade pizza dough and pizza lately and he's thinking it would be a good idea to start selling our homemade pizza. He's got it figured out that we would need 1/4 of the necessary pizza-making ingredients on hand at any given time and that our ingredients should be healthy. We're going to test out different pizza recipes until we find favorites and then go forward with our business plan.

When we got home, a new video game had come from Gamefly in the mail, "Destroy All Humans." Cutter had fun figuring out the rules of the new game, which makes me think of this article a friend posted on video games.

We began our ramen adventure by watching a few instructables and an instructive, yet strange video of a Japanese woman cooking with a poodle. We chose to make a shiitake mushroom broth. We then added bamboo shoots, mushrooms, green peppers, scallions, noodles and hard-boiled egg, accompanied by Sesame Chicken. It looked pretty cool and the boy who in recent years has said, "bleh" to most new foods declared it pretty good. This was not the 99 cent ramen Americans are used to eating.

After dinner, we headed to a local Ag Silver concert with Joe. It was Cutter's first rock/pop concert and while he was quiet and serious-looking throughout the concert, he could be spotted clapping, singing along and afterwards said it was a really cool concert. Other days are less active, to be sure, but most are at least as learning filled and joyful as this one.
Posted by Jen at 8:43 AM

I don't know how I missed this thread, but I can tell you I loved reading it. I was reminded of a favorite collection of books in our home....the one that started it all was if you give a mouse a cookie. Beyond that was if you throw a pig a party, if you give a pig a pancake, etc etc. Cutter reminds me so much of these stories. If you give a boy a book, and the chance to rename himself....thanks as always for sharing the joy that is your home and your heart.