His own sense of justice 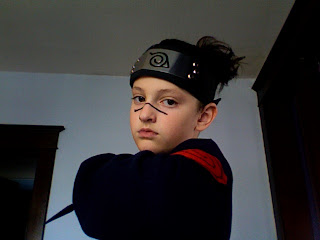 While we talk with Cutter about why we, Joe and I, believe certain ideas, hold certain values, donate to certain causes, we try to never assume that he will hold those same ideas, values and causes dear.

While I feel strongly that nature is essential to my well-being and that of the world, I have not said to Cutter, "You have to take care of the Earth or we'll all something-about-doom-and-gloom." Instead I have gone on walks with him, pointed out leaves I find beautiful, speculated about dead animals, pointed out hawks and herons galore and played out countless ninja/sword/spy battles in the woods.

While I think that growing our own organic foods is important to the health of body and soul, I have not forced him to garden with me, but have offered him the opportunity to choose seeds, plants that he would like to grow, with the promise that I would care for them. Even though I feel that healthy foods are key to a healthy life, I have let him choose what goes into his body, based on what his body needs.

None of these choices has come without much thinking and even struggle within myself, and much conversation between all three of us. All that to say, it has been interesting to see, with this freedom, where Cutter's sense of responsibility and justice have been popping up these past few months.

Recently, while hanging out at a backyard gathering, a squirrel began heading into the homeowner's garage in an attempt to stash nuts for the winter. Once he saw the squirrel, the homeowner began throwing a ball at the squirrel to try and stop it from entering the garage. Cutter turned to us, dismayed, and said quietly, "Why is he doing that?" I said that I didn't know but that he had every right to ask. So Cutter spoke up and asked his adult friend why he was throwing a ball at the squirrel, that the squirrel wasn't hurting anything. I can't recall what the response was, but Cutter had spoken up for what he saw as wrong and the ball throwing did stop in a karmic sort of way, after it was thrown one more time, and knocked over the owner's bike.

At the bagel shop recently, after we were done eating, Cutter looked at the bottom of his plastic cup, noted the number one and said, "Where do the recyclables go?" We looked around and saw that there was no recycling, so I said he could carry it home to recycle it if he wanted to- which he did.

Yesterday, while watching cartoons, Cutter saw a commercial for the new Lego Miners set and became very upset. He noted that the Lego humans were invading the land of the Rock people in order to mine for crystals, and that they were actually stealing the Rock people's food. He was upset and he said the commercial was lying by showing the Rock people as monsters who attacked the Lego people when really it was the other way around. We talked about justice and resources and the war in Iraq. We talked about how to respond to the commercial, and today, we'll be sending a letter to Lego, Inc. to let them know, in Cutter's words, what he thinks of their commercial.

It has been a fascinating journey with this boy, watching him form his own ideas about the world and his role in it and I am so glad that I'm traveling with him each day.
Posted by Jen at 9:12 AM