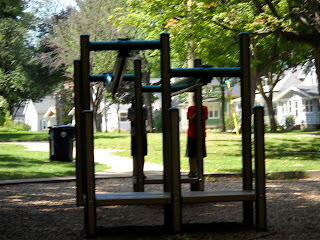 The one on the right, in the red shirt, is my son, Cutter, recently turned ten.


He doesn't like his photo taken, so I don't often see him on film, though I do "see" him, and saw him, and myself, quite clearly on the morning of his birthday. This was the first year Cutter chose to have a party which we put together as a family, as opposed to a package deal somewhere like Craig's Cruisers or Chuck E. Cheese. The day before, he and I traveled to the grocery store to pick up the supplies needed to decorate a park picnic area, to make dozens of miniature angel food cakes, to have an all-out Nerf gun capture the flag battle. That was when I first noticed something was slightly off. As I muttered aloud to myself and Cutter about ingredients we needed, or decorations I couldn't find, he said quietly, "I hope this is going to be fun." I asked if anything in particular was making it seem as though his party wouldn't be fun, and even as I asked, I had an inkling it was me.

I have never particularly enjoyed my own birthdays. They have always been very high stress for me, a day built up to be everything I'd ever dreamed of, a sheer 24 hours of perfection: just right gifts, absolute happiness, world peace.

So you might imagine my surprise in that grocery store when I realized that that was exactly what I was trying to give my son - and he was feeling it, not in a good way. From that moment, I told myself I would relax - and the change allowed us both to let go of expectation, to get silly in the candy aisle, to admire the newest Nerf items in the toy aisle, to pick all black balloons in the party department.

On to his birthday morning, where I continued to try and give Cutter exactly what I had never wanted. He'd recently expressed an interest in BMX biking, jumping off of ramps, doing wheelies; a somewhat difficult task on his mountain bike. So I thought, let's offer to get him a BMX bike for his birthday. The second the words were out of my mouth, it was like looking into a mirror, seeing a place I'd been many times before. His face shut down, even as he tried to reassure us that that was what he wanted.

Joe, my dh, and I instantly let Cutter know that we could get something else for his birthday, that the bike was just an idea. The more we tried to reassure, the more he cried and insisted that was what he wanted. We agreed to stop talking about the gift for a bit and we went our separate ways.

Growing up, I had been (perhaps am even now) considered "difficult to buy for" among the family. At the same, I did not want to hurt anyone's feelings by saying I did not like whatever gift had been presented. Not a winning combo on a day declared to be about absolute happiness. This was the mirror I saw in Cutter's face, the recognition of those conflicted emotions. Shortly after walking away, I walked back and sat down. I told him about my experiences with gifts, and explained that those experiences are what led me to a place of not enjoying gifts, of asking his dad to stop giving me gifts. I let him know that my love for him was in no way bound up to any gift offered and that we should get him something he was truly excited about. I asked him if he felt bad saying he didn't want the BMX bike. He said, "Yes, some," and that he still wanted to get the bike sometime. I wanted to force the issue, to say, No, we never have to get the stupid bike, but that would have been denying a part of Cutter, that part that doesn't want to hurt someone he loves. So I said, "O.K.," and the day carried on. We discovered what it was that he would really love for his birthday and we had a fun day with friends at the park. There was no perfection, there was no implication that he was "difficult" and there was a whole lotta laughter and love.

And then just two weeks later, my birthday rolled up. In years past, I have dreaded it. The pressure of trying to figure out just the right thing to do on my day, the fear that I would be disappointed in any gifts given, the ignoring of internet and phone because I didn't want to have to be "up" because that is what was expected of me on my birthday.

This year, though, was different. This year I decided to focus on my joy at being alive in this world, to give thanks for the gift of this life, gift enough for a thousand birthdays. I wrote notes to loved ones, I held others in my thoughts, I bought two vegan/vegetarian cookbooks, I went roller-skating, I downloaded a beautiful video game and I ate some delicious Mexican food. The day was not extravagant, nor was it truly outside the realm of what would happen on any other day in my life. But it was transformative and I am thankful.
Posted by Jen at 8:13 AM