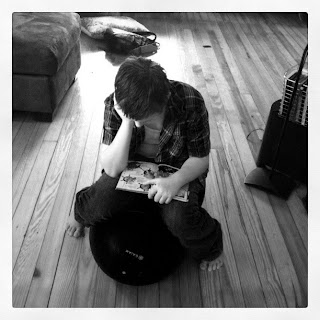 This photo was taken while Cutter was immersed in a Hardy Boys graphic novel. His love of graphic novels has led me into the wonderful world of comics and graphic novels, which I never really knew existed. I, myself, just finished the first collected volume of Sandman, by Neil Gaiman and can't wait to get my hands on the rest.
Upon seeing this photo on fb, a homeschooling friend commented that she was envious, that she couldn't get her son to do anything constructive. I commented that Cutter wasn't being constructive, that he was just enjoying himself.
My response niggled at me throughout the morning as not quite right. By saying he wasn't being constructive, it seemed I was saying he wasn't doing something of value. Thankfully, my eloquent friend and fellow unschooler, Amy Carpenter Leugs, chimed in, pointing out that "... constructive = what the heart loves, in unschooling speak. Because by doing what he loves, the child *constructs* his world and his connection to it ..." I love this image of children building their worlds from the inside, from who they see themselves as, rather than attempting to conform their inner lives to parental or societal constructs.
Amy's words spoke to the niggling feeling I'd had to my own response. I did not mean to imply that Cutter was not doing something of value, but that he was not doing it because it was anyone else's idea of a constructive thing to do. He was reading a graphic novel because that activity holds meaning and joy for him. If I had, for example, set a random time and said, "Ok, it's time for you to read now," or if I chose the book I thought he should read, well, he'd come to hate reading pretty quickly I'm sure, no matter how constructive I assured him it is.
Beyond graphic novels, Cutter's building blocks have largely, of late, been made up of playing Little Big Planet 2. He's discovered how to make a music video with sackbots and it's really cool to watch him set up camera angles and dance moves. He's been exploring his sleep needs as well, which I'll write about next time. And on our list of upcoming constructions: screen "puppet guts" t-shirts (you'll see!), film a live action movie and make silent foam shoes (the better to Ninja kick you with).
Posted by Jen Armstrong at 7:42 AM