Toward all that is unsolved 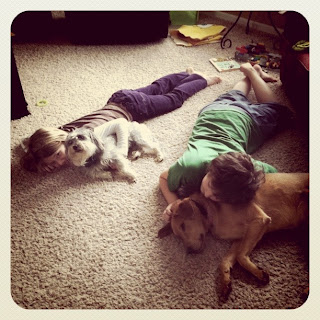 "Be patient toward all that is unsolved in your heart, damn it."
Okay, the damn it is mine and that's not the complete quote. That's just half the quote and a good portion of my frustration. I'll share the rest of Rilke's wisdom, though not until the end of my tale, which is when I became a bit wiser and a whole lot less frustrated. Many of you have recently heard this tale, so forgive my repetition.
If you weren't aware, we've been not trying to not get pregnant since the fall of the year Isaiah died four years ago. At times, this has been background fuzz for me, a journey there, but happening far away. And at times, especially more recent times, it has been front and center, uphill and downhill and full of corners I couldn't see around no matter how far I traveled. So, naturally, instead of patience in the midst of the mystery, I began pounding my head (fists would be too sensible) against every door I spied: adoption, fostering, career, pregnancy, vasectomy. I'm not sure I cared which door opened, as long as one of the answers was final. And preferably offered up by someone else.
This is where I found myself about a month or two ago, when I was feeling the urge to follow the fostering path again, feeling like I wanted to offer the Boy more companionship (not necessarily his want, mind you), feeling like our family was just right, feeling like I was ready to explore career options. I was going no where fast and no one was telling me what to do. Damn it.
And then we spent a weekend with my sister. And I sat there one day watching the Boy lay on the floor next to their big, gentle dog, Jersey. He hugged and petted and loved on that dog and a door opened. A door I'd never even guessed at the existence of before that moment. And on a drive shortly after that experience, I asked the Boy how it felt, when he imagined bringing another child into our home or bringing a dog into our home. He somewhat hesitantly said, "About the same," to which I said, "You know, it's okay if one feels stronger than the other," to which he quickly replied, "Ok, a dog." So we started walking through the dog door–
–and I realized how completely trapped I'd felt in my desperate seeking for an answer to the "more children" question. How I'd been ignoring the fact that we did have "more children," though only one still living. How I'd been narrowly defining the idea of companionship. How I'd been feeling guilty around my desire to explore my own passions of play and medicine. And then a window presented itself.
The following weekend we walked in memory of Isaiah at our local Hospice of Michigan Walk and Remember. While waiting to walk, I saw a woman whom I knew, though I wasn't sure how. In an unusual move, I approached her and it turned out that her husband used to work with the Esquire and we had talked about social work in the past. We agreed to meet the following week for coffee, where I learned she was currently working part time as a social worker with Hospice of Michigan, engaging families using her skills, including play therapy. I talked to her about my interest in Child Life, a program which works to ensure children in medical settings retain a child's life, particularly in the arena of play, and which requires less schooling, (because I already have a bachelor's) than going for an MSW, which had been feeling daunting to me. She said it sounded perfect for me.
And then another window. Talking with my sister the following week, I told her of my coffee date, my interest in Child Life. And she shared that while at the children's hospital with her son, who was receiving his weekly chemo. treatment, a Child Life specialist had worked with him, and she had thought of me the entire time.
Since then, we've started exploring types of dogs, watching shows on t.v. about training puppies and discussing dogs we've loved. And I've started the process to volunteer in the Child Life department at our local children's hospital, where Isaiah made his last hospital visit ever - and where both the boys were delighted with the play provided by the Child Life specialists.
"Be patient toward all that is unsolved in your heart and try to love the questions themselves like locked rooms and books that are written in a foreign tongue.
Do not now seek the answers which cannot be given you because you would not be able to live them. And the point is to live with everything.
Live the questions now. Perhaps you will then gradually, without noticing it, live along some distant day into the answer." –Rilke
These words have been in my living space for the last 11+ years. I may have had them memorized but it wasn't until this year that I began to have any understanding of them and I sense that a lot of it has to do with trust. Which I'll touch more fully upon in my next post, where I try to unpack a few tasty morsels from the recent We Shine with Unschooling conference we three attended.

Posted by Jen Armstrong at 4:49 PM