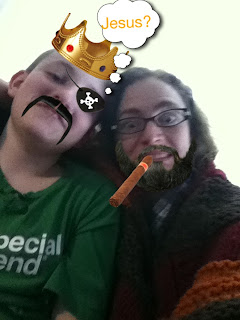 It's been some time since I've blogged, nearly a year, and I thought using the monthly suggested Unschooling Blog Carnival topic would be an easy way to get back into the flow of words.

And it was pretty easy, like writing a prolonged Facebook status update: I'm that mom, the one who helps her son follow up on his interest in knife throwing by taking him to the knife and gun show; the one who plays frisbee, soccer, basketball, etc.; the one who dyes her son's hair fire red and keeps up on all his anime shows.

I could go on and on, and sometimes that's fun for me, to share what our days look like, how they are so full and varied, but it didn't feel quite right this morning. I wanted to offer more, a deeper look into why I'm that mom.

From the beginning, I've been that mom, the one who holds play to be one of the most important and worthwhile ways in which children and adults engage with the world and each other. Yet I was also that other mom, the one who let mainstream parenting voices override the voices inside my head, the mom who had set bedtimes and a tight rein on food choices.

Always unschooling with our two boys, I began to stumble onto radical unschooling as we attended therapy with our younger son, Isaiah, and I began to question what our goals were for therapy in general, and in life, as parents of these two amazing boys. The answer, as Isaiah lived his last year of life, was that I wanted our boys to know happiness in life, of the deep, contented, intensely playful and engaged variety.

After Isaiah died, I was the mom who suddenly had one child, and a lot of time to think. I'm the mom who read a ton, books and online, John Holt, Sandra Dodd, Anne Ohman, Pam Laricchia, Rue Kream, and who observed and talked with wise friends in person– the mom who slowly started integrating radical unschooling principles into our living, who joined online communities and began attending unschooling conferences to support our journey. I'm the mom who has in turn been supported, in thinking, talking, parenting, in everything, by The Esquire, a trusting and patient man.

I'm that mom, the one who has traveled a long way from where I started, who recognizes that having a good relationship with my son is one of the greatest gifts I can offer both of us; that relationship is built on friendship and listening, trusting and working together to solve problems, silence and play and many amazing conversations.

So yeah, I'm that mom, the irreverent one, the one who has her own DS and who loves anime, the one playing chinese jump rope at the park, the one who can speak LOLcats, the one swordfighting in the backyard, the one whose son can look at her face and ask “Mom, are you tired? Or do you need to eat?,” because he knows me as a whole being, because we're in a relationship and we care for each other. I'm that mom, the one whose living son calls many times each day, “Hey, Mom,” because he knows I'm present, I'm listening, I care to know who he is and what the world holds for him, because I am his friend with whom he shares his questions, his laughter, his tears, his life.

Yeah, I'm that mom every single day, the thankful one.

Written as part of the Unschooling Blog Carnival.
Posted by Jen Armstrong at 11:44 AM

You came back to blogging with a bang!

Hi Jen! Thanks for sharing your story with the Unschooling Blog Carnival! Your post was brave and inspiring!
I really do love all the Jabberwocky references. ;)

Frank, I have to say it was your enthusiasm for the carnival that drew me in, so thanks! And Sue, I too love the Jabberwocky - and my beamish boy!