It is almost inexplicable, my love: a tribute

tribute, n.: an act, statement, or gift that is intended to show gratitude, respect, or admiration. 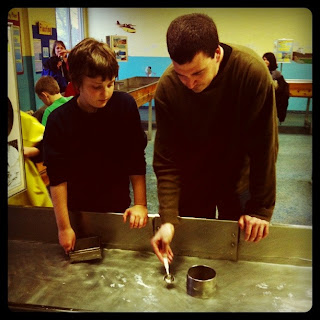 When I read Frank Maier’s beautiful post about his wife, Ronnie, for May’s “She’s That Mom,” unschooling blog carnival, I was deeply moved. When I saw that June’s blog carnival theme is a tribute to dads, I found myself excited. I primarily use
"O frabjous day" as a repository for reflections on my parenting/unschooling/self-discovery journey. Therefore, you’ve seen Cutter and me frequently, but rarely have you seen Joe. But today, inasmuch as my words will be inadequate, I am going to enjoy celebrating the remarkable man whom I love..
I fell in love with Joe long ago, in an algebra II classroom, in between passed notes where we planned trips to the Great Lakes Shipwreck Museum & poetry readings at my house. I still remember the moment he came to class late, having just argued in front of the school board that the military should be excluded from the school campus until they had a policy of inclusion. Quite frankly, he was dreamy.
From there, we bounced back and forth, until we hit our second decade, I in Texas, Joe in New York, and I enforced a period of silence between us, having burned all his letters to me in a fury of passion. I love the description one of my Shine friends gave, of that smoke having sent all that passion and love into the skies, to spread and return. He still has every letter and note I’ve ever written. He is an amazingly loyal fellow. Just ask his friends, the ones he's had since grade school.
Letters brought us back together, and we reunited in Chicago, where we decided over a beer and a ball game to get married. Two months later, we did not decide to get pregnant, but pregnant we were. And when I told Joe, practically a kid, in his second year of law school, he was happy, excited. He was remarkable. And when Joey (now Cutter) arrived, he didn’t question the baby in the bed between us. He just enveloped us both in his calm love, dancing us through the nights with his reggae and hip-hop mixes.
Move forward a mere 16 months, when our second unexpected joy, Isaiah, arrived early and full of complex congenital birth defects. Joe was in his first year at a large Chicago law firm. Isaiah spent that first year of his life in a pediatric intensive care unit - and every morning before his 12 hour workday, and every evening after it, Joe went to the hospital, making sure he caught rounds with doctors, making sure he had time to hold his younger son before heading home to his older son.
It was Joe who showed me what open communication looks like, and I will never forget the day we walked out of the hospital, months in, and he said to me, “You know, it’s okay to think it would be easier if he died.” I don’t remember what my response was, but I have always thought that was an amazingly courageous thing to say and I always know that he has room for me, for Cutter, for everyone to be who they are, to think whatever they need to think, and he has the patience and willingness to listen to and talk with those who have need. And it was Joe who carried his boy, wrapped in a favorite quilt, down the stairs for the last time when I could not bear the thought of doing so.

He has trusted me, and trusted Cutter,  every step of this radical unschooling journey, while showing me that a child needs a relationship with both parents, and that it's okay for those relationships to look different.  He has been a joy to watch as a father, whether telling made-up Thomas the Tank Engine stories to his boys at bedtime, or taking Cutter to the set of a movie he was doing legal for so Cut could meet the director and watch a scene being shot. He has shared his love of hip-hop and chess, of Sherlock and film noir, of Jeopardy and video gaming and golf, without force, without expectation, and for that reason, his joys have become our joys. He shares his work at the dinner table, soliciting opinions and he plays frisbee in the backyard even when I know he’s fatigued. He has been imminently flexible, always supportive, and decidedly tolerant (in the most positive of ways) when it comes to projects on the table, sleepovers, writing group meetings, everything. He has listened through the years as I ponder aloud every. single. thought. that occurs to me in the realms of relationship and parenting, and he's been an, "Okay let's give it a try," presence as I moved us further into radical unschooling, away from arbitrary sleeping/eating/gaming limits into a wholly new world. And these days, he shares radical unschooling with associates in the corporate world, with much more finesse than me, I might add.
~~~ 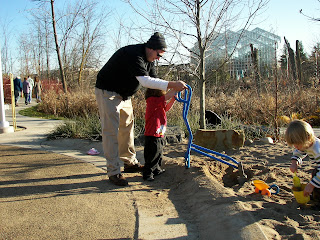 A final short story. It seems so small, but it so very beautifully illustrates what makes Joe such an amazing dad: he loves to spend time being with his son.


Wednesdays tend to be a our always hectic day around here. Joe commutes to work in Grand Rapids, 40 minutes away, while Cutter and I drop Pip (the puppy) off at doggie daycare before heading in to one of the grandma’s houses in Grand Rapids. I then head off to volunteer with Child Life at the Children’s Hospital before heading back to Holland to pick up the pup, while Cutter hangs with a grandma&grandpa. Joe then leaves work early to have dinner with Cutter and the grandparents before driving Cutter to his freerunning gymnastics class. After class ends at 8:15, they head back to Holland, usually arriving home around 9 p.m.
There was a Wednesday recently where Pip was boarding overnight as Joe was in Detroit for work and I would be taking Cutter to and from class. I said something to Joe about his getting a break, meaning not having to get home so late during an already late work week. He disabused me of that notion, sharing that the Wednesday night drive home was the best part of his week. When I asked why he said, "Because I get to spend time with that dude (Cutter), and we get to talk."


So many words, and I  have not  come close to sharing the gift that is my love, the father of my children, though I hope that my intentions were clear, that some glimpse of  my gratitude, respect and admiration have been revealed in the attempt. 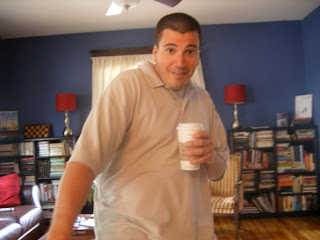 Written for the June Unschooling Blog Carnival: A Tribute To Dads

Thanks for your lovely comment about my post for Ronnie last month and congratulations on this wonderful, heartfelt post. I'm sitting in my hotel room checking mail while we attend the LIFE is Good Unschooling Conference this weekend while celebrating Ronnie's birthday! Wow! And then I added this lovely tribute to my happiness knapsack for this wonderful day. Thanks for the inspiration!

So sweet -- your love is a steadfast, loyal husband and Dad! The kind every kid deserves.

Jen, this is an absolutely delightful post! I could just see all of those different scenarios you described. Thank you for sharing this with the Carnival, and, yes, you were clear. What a lovely family!