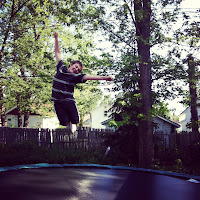 This is my boy. He's eleven, almost twelve, and almost taller than me.  He makes a lot of discoveries about his body and his world. We just got this trampoline a week or so ago, and already he's decided that he prefers to jump first thing after he wakes up, before he eats, because it feels best to his body. And just yesterday, he made me work hard in our arm wrestling match. It's a big deal, trust me.

Recently while chatting, he learned a few things about the lives of people he knows, which prompted him to say he was grateful for his life. After he shared his gratitude, I shared how I keep a gratitude journal on my bedside table, where I try to write a few things each night for which I'm thankful. He was curious for a minute.

A couple of weeks ago, he went with me to meet a mom who is considering pulling one or more of her kids from school. Afterwards, Cutter asked what we were talking about, and I shared the general conversation, along with the observation that it can be scary for parents to move from school to unschooling. At that point, Cutter said, "Well, if unschooling doesn't work, they could always go back to what they were doing before."
Recently, when Cutter didn't feel like playing video games, a friend stated that he imagined Cutter's life to be like this: Wake up, watch anime and play video games until something makes him decide to go outside. Cutter didn't really like that description of his life, because he didn't really feel like it was accurate, that he doesn't really play video games all the time. While Cut was trying to work through the statement,  he said, "If you can play video games whenever you want, you don’t want to play video games all the time." (emphasis his)


In case you, too, thought that was an accurate description of Cutter's life, I thought I'd share an overview of the last few days, not because I have to, but because it's fun and our lives are interesting.


Saturday found us heading off to a local park, wher I had organized for the wonderful 19 yr. old son of a friend to introduce us to the Belegarth Medieval Combat Soceity.


~~~~~~~~~~
And then life got full, and I didn't finish this post, so I'll just jump forward a week, to yesterday, and offer up a one day snapshot of radical unschooling, in response to the oft asked questions, "What does it look like?" "What about math?" "What about science?" "What about history?" and so forth. I'm not going to get half of this day down, but one hopes you'll get the picture (on second thought, I don't mind at all if you don't get the picture. I have the picture and it's gorgeous).


Yesterday morn, I picked Cutter up from a two-night sleepover with several friends in Detroit. While there, he watched Dr. Who, played video games, made paper airplanes, got tackled by a younger sibling, ate lots of pizza, and learned a new card game, Magic the Gathering, among other things.


He asked if we could stop on the way home to get a starter Magic pack. We ran into a store, found the cards, and I decided I would get a starter pack, too, so I could learn and give him someone to play with at home. He spent some time figuring out how much money he had to spend, if he could get a booster pack, which color cards I should get to have the most interesting game play between us. Meanwhile, a guy next to us was feeling up every deck of baseball cards in the aisle. I asked what he was doing, and he flipped a card pack over, showing us the odds of finding a special collectible card. He explained the special card was engraved, and that he was feeling for the indentation. Interesting hobby (or profession, as the case may be).


We carried on in our drive, and I told Cutter about a fun thing, Thinking Sticks, I'd read about in a book I'd just finished, Sandra Dodd's Big Book of Unschooling. Essentially, you have two random words and try to associate them. I threw out "grass" and "history." As he grew silent, I thought he was uninterested (he was in the backseat, the better to spread out his legs and his playing cards). Then he said, "Lots of men died in the grass in World War II." This is how the connections built from there, via questions, computers, reading, philosophical ponderings... (I can't make this awesome shit up):


-In Flanders Field, poppies for remembrance, veterans in the middle of the intersection, Canadians were in the war?, when was World War II (lots of interesting facts on this little time line),


Break for dinner, for which Cut made himself some ramen and shared, via Smosh's Japanese-American host, that it uses 15 calories to properly use chopsticks. And we were off: chopsticks, to seeing about meeting unschooling friends at a Japanese bookstore in NY, to possibly making Japanese food for an unschooling conference potluck to the word 'onigiri,' also the name of a character in a favorite anime series, Air Gear, to wondering what English sounds like to people from Japan, to me sharing about animal sounds being pronounced differently (by humans, not animals) in different languages, to sharing how jumbled students found certain phrases in English from my time teaching ESL ("Whaddyawanna eat for dinner?" is a far cry from the enunciated "What do you want to eat for dinner?" learned in a classroom).


While we ate, I read "In Flanders Field," and Cutter asked if Switzerland was still neutral. I said, "yes," and then googled it, and found fascinating info. about neutrality: Japan is permanently neutral under a treaty, belligerent countries may not invade neutral countries, but neutrals may defend against such invasions if they occur, etc. Cutter asked why we dropped the bomb on Japan and not Germany and wondered how the world would have been different if we had bombed Germany.


While we chatted about the war, Cutter was downloading a demo for the game Journey on the Playstation Network. We both immediately fell in love with the game and I looked up their other games, which also look amazing (Cloud: hospitalized kid using the power of imagination to fly - yes, please!) Tried several times to buy the game on PSN, but my card wouldn't work. More googling, discovered due to latest hack that some cards just won't work, so we decided to go a different route and did end up with this amazing game.


While the full version downloaded, I checked fb, where I found, on the 'Cool things for our kids' fb page started by an unschooling mom, this awesome video: winner of an "Explain a flame to an 11 yr. old" contest put on by Alan Alda; a friend told us about it months ago.


When Cutter had tried the demo for Journey, his character ran across sand dunes,  and then he headed up a sand dune, which slowed him down, prompting Cutter to shout joyfully, "Awww, physics! Yes! He slows down going up."  Scrolling through the Science Friday site, I found a physics tab, and we ended up watching a second short video, this one on taking paper airplanes to the next level.


By then, Journey had downloaded and Cutter settled in to play, I to watch. There are no words, spoken or written; it's a world of musical notes and flying ribbons and capes and maps and creatures that steal your flight. It requires exploration and cooperation with another fellow traveler and using objects to block wind and did I say, it's beautiful! While playing, Cutter noted that the radius of the circle of light which occurred when he flew was expanding as his skill in flight increased.

After a bit of game play, we headed upstairs, I to bed, Cutter to Skype with friends, to finish an anime series, High School of the Dead, and to practice against himself in Magic the Gathering, playing his deck against my deck. 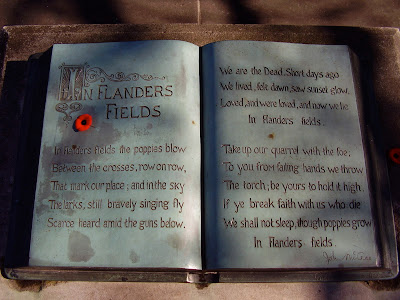 Today, I can't wait for Cutter to wake up. I'll likely share that my noise tolerance is a bit low, due to my man being gone (therefore, my sleep being minimal) and in addition to an early, bark-filled wake up courtesy of Pip the sloooooowly calming down pup. I'll share the definition of physics, which we both wondered about yesterday, and I'll look forward to learning how to play Magic the Gathering. And from there, the day is wide open. Oh, right, except for trying out some resale shops to see if we can find the suit in Cutter's mind's eye, (for our unschooling "prom"), and trying our hand at onigiri and doing a run through of our shadow puppet show, and, and, and.....

Posted by Jen Armstrong at 9:43 AM

I never can figure out if it is more amazing that unschoolers days are *so* alike or the parts that are so different... :~D