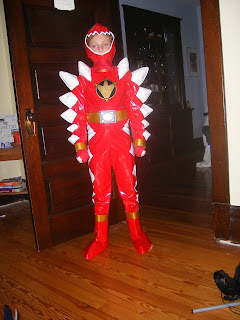 Jos has been very into coral reefs and deep sea life lately. We've been reading books and watching nature shows and looking into scuba lessons. Watching a recent flick on the Great Barrier Reef, fish began attacking a crab that crept into the open. Jos didn't want the crab to get eaten and I explained that bigger fish would come along to eat the crab-eating fish, and he said, "Yeah and then the biggest fish will get eaten by Time and nothing can eat Time." I wonder why it takes the rest of so long to realize that no matter how many escapes we make, we're all going to get eaten by Time, in the end?
Jos found his Halloween costume at the resale shop last week. After online checking, we discovered it's a Power Ranger, DinoThunder, though I'm still pretty sure that it's actually a device for human suffocation.
Walking to the bus stop in Holly to pick up cousins Olivia and Sophia last week, Jos and Aunt Nikki and I reminisced about making the same walk with Isaiah. About his desire to pick every dandelion, stop at every pile of rocks, about how long it took to make the walk. Jos said, "Just because he was slower doesn't mean it wouldn't be fun to still have him here." He is coming into his grief, and it is hard for me, because it would feel so much easier to not remember, to not have Jos experience sad. Consider this your friendly PSA reminder: feeling is hard, but worth it. Because I don't really want to forget Isaiah, and I do want Jos to have every memory he can to hold for as long as he can.
Posted by Jen at 9:59 AM

finally got your new blog on my rss feed... and i'm glad i did, cuz you drop some good prose. a nice reflection to get the day going. thanks j.