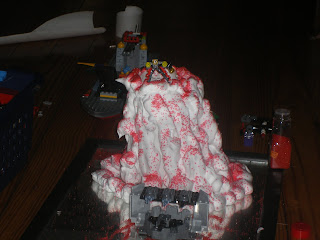 Our friends recently reminded us of the joys of shaving cream play. Thus was born the world of our sparklemon (Joe and Jos have been playing the Simpson's video game, hence sparklemon). School at home officially ended about three days after it began, though Jos would still like to do "projects" with me.
A few days ago at lunch, we played a game called "Let us give thanks." We took turns giving thanks for something related to the lunch. I gave thanks for the person that grew the cucumbers that became our pickles. He gave thanks for the person that invented the machine that chopped the trees down to make our lunch table, and so forth. Whoever came up with the last one was the winner. So toward the end, I said, "I give thanks for the people that made the boy that's eating the lunch." And he looked at me and started laughing and said, "You and Dad made me," and then laughing even harder, said, "You and Dad are walking factories."  It was so fun to laugh with him!
Last night we were looking at a photo of a space station and Jos started talking about how it goes around, trapped in Earth's orbit. When I asked, he said he'd learned it on one of his shows. My money's on Jimmy Neutron. All hail the magical power of cartoons- and kids! We're off to find science supplies of some sort so Jos can test the soil sample he took from the sand trap at the golf course on Sunday. I imagine he'll discover it's full of anger and sweat and curses ;)
Posted by Jen at 9:06 AM

i heard a very simple explanation of how satellites (and space stations i presume)get "trapped in earth's orbit". remind me to tell jos next time we are together... that is if you haven't explained it already.

funny how the unschooled boy appears to know more about sex than my public school kid. his teachers must be more liberal :) I love the new blog, and check in often. It's nice to see your joys, yet still know Isaiah is to be found in the many corners of this page. We miss you all and it seems we need to hit the pause button soon and come visit you all. love to all of you
cole